A few weeks ago, I stumbled across a cute little white dog named Stella on a rescue site. I have been wanting another dog. I thought having another little dog would help my Yorkie (Peyton) with her grieving over the loss of my sweet Haley who crossed over the Rainbow Bridge last June. I had previously seen this dog, but never inquired about her. When I stumbled across her again, I felt like it was a sign. Stella is a Maltese-Yorkie mix, is 8 ½ years old, timid, and so wants to trust people. She is just the sweetest dog ever.

I sent in an application and days later had a phone interview. A few days after my phone interview, the foster mom called me and we spoke about 90 minutes on the phone about Stella, my home life, my pets, etc. It was so sad to hear that she had been neglected, abused, adopted and returned. I agreed to foster her as a trial basis for 10 days and would pick her up on January 7th. She immediately jumped in my SUV, laid down on the blanket I had put in the backseat and went to sleep. After meeting my two other dogs, they all went out in the backyard to potty. She seemed comfortable right away in my backyard and so far, was getting along with my other two dogs.

Once Stella came in, I went to eat lunch in the den. She came right in the den and got up in the same spot where Peyton sleeps. She proceeded to take a nap and I snapped a picture. Due to the neglect and abuse Stella endured, as well as some health problems, she is hesitant to trust a human. It is still a work in progress; however, she is making great strides in doing new things each day. I ended up adopting Stella on day five of fostering her, because I was already in love. Later that night, I snapped a few pictures of her “gotcha day” sign to post on Facebook and she leaned over and licked my cheek! Oh, those sweet puppy kisses. She is slowly coming to me when I call her and did well at her first follow up vet appointment. I am so happy that I chose to adopt her. Let the spoiling begin. 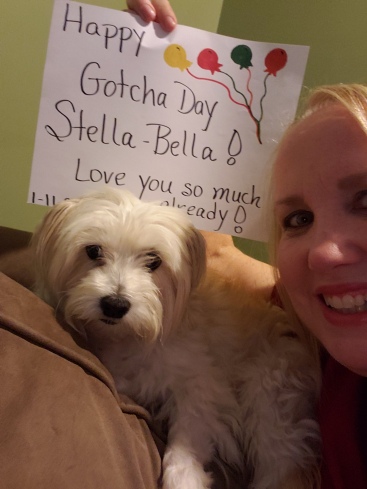