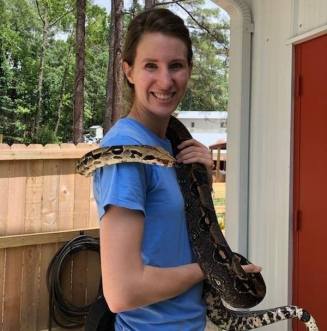 For the past few months I have been volunteering in the Ambassador building at the zoo. I have been working with a zookeeper named Kaitlyn. She is an amazing ambassador for Riverbanks Zoo. She was nice enough to answer my questions for the blog. I hope everyone enjoys reading about her.

Kaitlyn is 25 years old and has moved around a lot around the east coast and the Midwest but calls Wisconsin home. She has a younger, sister, her parents, and a dog. Her parents live in Wisconsin, but the family dog Taz, lives in Pennsylvania with her sister.

She chose zookeeping because, she has always had a passion for all animals and grew up

going to the Jacksonville Zoo regularly. Her dream in high school was to work with animals, but she wasn’t sure what exactly she wanted to do. While attending The University of Wisconsin-Platteville, she had the opportunity to intern with the local aquarium and fell in love with the idea of zookeeping. She knew she not only wanted to take care of the animals, but to educate everyone on the importance of all animals, build homes for animals that are forever improving, and studying them to learn more about the species. She has a Bachelor of Science degree with emphasis on Zoology and Environmental Science. She has been a zookeeper for 8 months but also did an internship for an additional year.

Her favorite animal to work with is Miss Piggy, she is a nearly 50-year-old Texas Tortoise. Despite her age, and the fact that she is a reptile, she is incredibly smart. She knows how to touch a colored target, wave her leg, lay down and open her mouth all on cue. Kaitlyn does training on a regular basis with Miss Piggy.

Kaitlyn’s hobbies include hiking and visiting the beach but in her free time she also bartends on Friday evenings in Augusta because she loves talking with people! She and her boyfriend have been dating for 4 years and he lives and works in Augusta.

Kaitlyn has been at Riverbanks Zoo since January 2018 as the Animal Ambassador Keeper. She is the guest engagement ambassador, and leads programs that include animal encounters, narrating animal trainings/feedings, and engaging with every day guests.

I have learned so much from her in the past few months. She is an asset to Riverbanks Zoo; our animals and we are blessed to have her.