God had graciously paused a thunderstorm to grant us a couple of hours at the Grand Canyon for some breathtaking views. As we were walking to the car after a phenomenal sunset, Gerry mentioned his throat was sore, so our son, Cody, drove the eighty-mile trek back to Flagstaff. The heavy downpour resumed as we were exiting the park.

Gerry dozed in the front seat while I searched my travel app for room availability at Little America Hotel. I fell in love with this eclectic little place during our visit in 2015, but wouldn’t you know, there would be no vacancies this year. The one reservation I should’ve booked months in advance, I didn’t. Being on a whirlwind road trip, I wasn’t sure the exact day we’d arrive—until today.

I was disappointed, but more so, I was concerned when every familiar hotel lining Flagstaff’s main thoroughfare also showed no vacancy. Not sure where to go, Cody stopped for gasoline while we determined our next course of action. I ran inside the store to purchase Hall’s cherry-flavored cough drops for Gerry. Clouds were still pouring buckets of water on this crisp, dark night, so I was drenched and shivering, laughing uncontrollably at myself as I jumped back into the car. Gerry also chuckled at my misfortune but appreciated the nice gesture in my attempt to make him feel better.

I finally found a room available at a Hampton Inn further north of our current location. I asked Gerry for his wallet in order to book it. God, on the other hand, had a different plan.

In transit, I pulled out our Chase credit card and entered the requested information into my iPhone. We’d had this card for more than twenty-five years and never had any problems; yet tonight, it declined—four times in a row.

God’s unique warning in something as simple as this declined credit card is no coincidence.

No longer in the tourist section of Flagstaff, we slowly drove through the relentless rainstorm finding ourselves amidst their local nightlife district—clearly the wrong side of town for us. I’m not sure if there was a college or university close-by, but the young, raucous crew was having a blast, unconcerned about the downpour and thunder clapping around them. Most were beyond tipsy as they entered and exited local bars, so we wasted no time turning the car around to head in the opposite direction. I’m sure the hotel further north of this little party district was a nice one, but we were suddenly okay with our current ‘declined credit card’ situation.

Our energy levels were completely depleted. I dreaded mentioning there were no hotels south of us for sixty additional miles. Gerry stated we’d be heading south in the morning anyway, so why not get a head start? We both did our part keeping Cody alert as he navigated unfamiliar roads in the deluge of falling waters from the sky. I’d never seen so much rain in my entire life. The drive from Flagstaff to Sedona was quite treacherous. Little did we know, it was the beginning of monsoon season for North America.

Monsoons originate in Mexico. They quickly form when seasonal shifts in wind direction create an entirely different type of weather pattern. These nasty storms push into the southwestern states and are quite dangerous—especially with flash flooding. We were oblivious to the seriousness of the monsoon winds and torrential rain. God saw fit to safely guide us through it all.

I managed to find a delightful room in Sedona at a Holiday Inn using my handy-dandy travel app, but in order to book it, we needed that pesky little credit card. Surely, it had been flagged for suspicious activity, so I suggested using another card. Gerry, however, was adamant in using the one rejected earlier. With a smirk on my face, I shook my head the entire time thinking it would decline again. This time, he verbally called out the card number, expiration date, and CVV code, as I re-entered them into my iPhone.

I quickly sat straight up in my seat, dropping my phone in the process. I wiped away the smirk as my eyes widened and asked, “Wait—what? What’s that expiration date again?”

Fumbling for my phone in the darkness, I giggled and said, “Honey, no wonder the card rejected earlier. I was giving the expiration date as September, not October. What was I thinking?”

I’m almost positive Gerry rolled his eyes as Cody burst out laughing. We were all clearly amused for the bone-headed moment I had earlier as I tried booking a room in northern Flagstaff.

When we entered the parking lot of our hotel in Sedona, we quietly sat in the car for a few moments. Mesmerized by the rain now gently falling from the heavens, we listened to the soothing sound created on the windshield, but the hypnotic state we were all experiencing could’ve also had something to do with our sheer exhaustion. 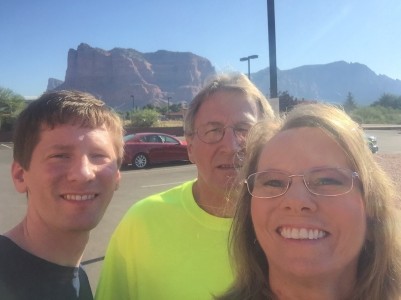 As we laid our heads on the fluffy white pillows and drifted off to sleep that stormy night, we were all comforted, knowing every single detail unfolded exactly as it should have. Without God’s protective hand, who knows what we may have encountered otherwise.

He had clearly spoken—not audibly, but God was present the entire day. From the splendor and beauty of the sights we’d seen to the minor inconveniences we needed to block our so-called, brilliant plan—He was attentive to our every need. As always, He had everything under control. God reminded us of how our way is not always the best way. When things don’t go accordingly, it may be for our own good. God’s protection thousands of miles from home was His priority for my family—I’m absolutely convinced of it.

I was elated departing Sedona the following morning on a beautiful, sunshiny day. We were less than six hours from the sole purpose of this entire road trip. It would be our final destination before heading back to the Palmetto State of South Carolina, and I could hardly wait…