According to Google, Dallas is the third largest city in Texas, and ninth largest in our nation. In my opinion, it’s the most daunting to navigate. I was a passenger for a previous road trip in 2015 with our daughter and her family and quite honestly, I was a

nervous wreck. It was nearly impossible to enjoy the mesmerizing sparkling midnight skyline with their intense traffic, but I somehow managed. My heart races just thinking about it.

With this bit of information in mind for our 2016 trek across the USA, I called driving dibs for this enormous metropolis once we reached the city limit sign. I actually insisted. In a meager attempt to persuade my husband Gerry easily, I forfeited the remainder of our driving marathon for him and our son Cody to split between themselves. Surprisingly, they both humored me and agreed to my crazy little deal. Otherwise, my backseat driving alter-ego may have reared her ugly head—and no one wanted that girl on our trip. I could’ve sworn they secretly adored her, but Gerry and Cody both swore they didn’t like her at all, hence my decision to leave her at home. Y’all would be so proud…

After driving all night from Lexington, South Carolina, we closed in on Dallas around lunchtime the following day. This year, we’d see the mega city during daylight hours. As we approached the outskirts, Cody’s driving shift came to a close.

It was lunchtime, but none of us were hungry. We grabbed a pack of cheese crackers and cold Pepsi-Cola from the ice chest and carried on our traditional American, wind-in-the-hair road trip. Finally, it was my turn to drive.

Nervous excitement consumed me, but I’m happy to report, I drove like a pro. The midday traffic was more tolerable than the midnight mayhem the previous year. The intimidating multiple lane roadways were still packed full of cars. I navigated their intricate highway system that in my opinion, resembled a big roller-coaster ride. I loved every exhilarating moment.

Exercising such formidable driving ability, Gerry and Cody suggested I continue our quest without stopping for a driver switch. As we exited the Dallas-Fort Worth area, that famously long and straight Texas

highway magically appeared out of nowhere. It was right up my alley. This is an area you’d definitely want a full tank of gasoline. There was nothing intimidating here. The speed limit was eighty, so eighty(ish) was what I did.

There are reminders up and down the highway system warning drivers that the left lane is for passing only. After passing, you must safely move back into the right lane. What a novel idea. I wish South Carolina had the same law. Oh, wait! We do! We are merely lacking in the reminder sign department. Where can we start a petition to get those for the Palmetto State? “God bless Texas.”

The scenery in this great state is very special. It’s exactly what you’d expect, but in a peculiar way, nothing you’d expect at all. Trains stretch as far as the eye can see. On one side of the road are oil wells. Grandiose wind turbines occupy the other. Chances are, they all belong to the same roughneck or rancher, but who knows? They contradict and complement each other simultaneously. It’s the old and the new, the big and the small. Oh, never mind! There’s nothing small here. The old saying “Everything’s bigger in Texas,” is true. I’ll bet that landmark steeple will never be mounted on a church rooftop. 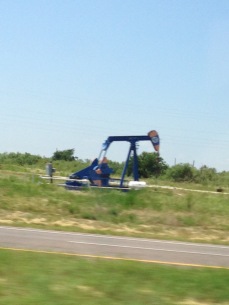 Our course transitioned further north to I-40 via US-287. We were gravitating toward a national historic highway. Maybe you’ve heard of it…

I drove until we reached Amarillo. This is where our road trip took on a life of its own. So

far, we’d been driving fast and furious, but join me for my next post where the fun truly begins. What good is trekking across the United States of America unless you experience a little bit of classic Route 66.