I have always been independent and not wanting to miss out on things because of being single. I attend NASCAR races alone, rock concerts, college football games and today, Magic Kingdom. I had friends say that I was crazy, and some said I was brave to travel from Columbia, SC to Orlando by myself. The trip to the Magic Kingdom came out of wanting to go to Orlando for The University of Alabama’s season opener on September 1st. You see, I am a huge college football fan-moreover the Crimson Tide. This is where I am presently a student in the RN to BSN Distance Learning Program and the university that my oldest son earned his Mechanical Engineering degree from- so, it holds a special place in my heart. So last year when they announced that the season opener would be in Orlando I decided I had to attend. I also decided I wanted to go to Magic Kingdom. I arrived at Disney’s All Stars Sports Resort at 1:45 p.m. today and stepped into the Magic Kingdom at 2:30 p.m. I felt like a kid in a candy store. 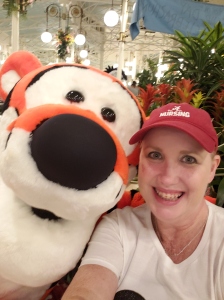 With the help of friends who have recently gone and my cousin Christy, I planned my rides carefully using my three Fast Passes. I was also able to make a reservation nine days before arriving at The Crystal Palace Restaurant which is a buffet style restaurant with the Winnie the Pooh and friends’ characters.

The last time I was at Disney was 20 years ago with my children and parents. My, how things have changed. There are Magic-bands that you are given to use as your ticket, your hotel key at the resorts and to use as your Fast Pass to skip the traditional waiting lines. It is fascinating to me the way that technology has changed even a trip to Disney.

In writing this blog post today, it was not my intent to promote Disney, or college football, but, to inspire people – including women – in getting out and doing things. It doesn’t matter if you are single, if there is something you love to do or dream of doing, then do it. You only get one life and I am trying to make the most out of mine. I do get tired somedays and I don’t get out of my pajama’s. But, fifty years have now gone by and my life is half over. I think that is why I am trying to do as much as I can while I still can. I am finally getting my four-year degree. So, go live your best life. Do things you are interested in and don’t be afraid to travel alone or be the only one in a restaurant surrounded by Winnie the Pooh characters and families. As tired as I am while I am typing this, it was one of the best days of my life. And, tomorrow, I’m off to Animal Kingdom!

1 thought on “My Day at Magic Kingdom”