Well, this time around, I thought that I would blog about a new product that I’ve recently tried. By “new,” I guess I mean, new to me. I’m not actually sure how long this product has been on the market. The first time I saw and experienced Udi’s Soft White Bread was a couple of weeks ago at a baby shower. 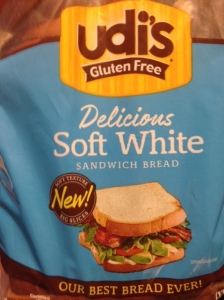 Since my husband and I decided to travel to Ohio this weekend, I decided to buy some. Sandwiches are the most car-friendly food that I can think of, but it’s so hard to have a good gluten free sandwich without the aid of a toaster. The idea behind this super soft bread is that you don’t necessarily need to toast it. We purchased a loaf for nearly $8.00 at Whole Foods, which is pretty steep for me. We usually purchase Aldi’s whole grain gluten free loaf for $3.99. So, the question is, is this bread worth the high price point?

The first thing that I think is worth mentioning is the size of the bread, which is much closer to a normal slice of bread. I don’t know if this picture of the bread beside my hand actually gives you an accurate idea of how big it is. For those of us who’ve been used to eating tiny sandwiches with those baby-sized pieces of gluten free bread. With this bread you can place a slice of cheese or deli meat without cutting it down to fit the tiny slices of bread.

As far as taste goes, this bread is good. It fits the white bread ideal, which means that it doesn’t have much of a flavor of its own. It doesn’t get in the way of what is in the middle of the sandwich. I tried it with my homemade chicken salad and it tasted like a regular sandwich.

Texture, as with all  is this bread’s downfall, I think. Yes, it’s soft enough to use without toasting it. Anyone who eats gluten free bread for any reason knows that the unbending, crumbly nature of a slice of GF bread makes it inedible unless you toast it. So, the fact that this bread is soft and doesn’t require toasting is an advantage. However, the texture is NOT like regular white bread. Underdone is the word that most accurately describes how each slice of this bread feels, except for the crust, which is hard and dry, even by gluten free standards. To be fair, I really don’t know how you would make a slice of G-Free bread soft enough to eat out of the bag without feeling a bit underdone.

Here you can see where I took a bite of the bread that included the crust. I immediately concluded that the crust is inedible. 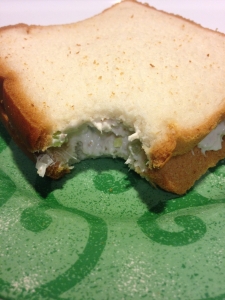 I tried toasting the bread and it doesn’t make it feel much better. It seems to get the outside a bit crispy, but the middle of the bread is still a bit gooey. The other thing is, despite being soft and pliable, the bread still seems to fall apart somewhat. These lines, which I’m calling stress fractures, appeared in my bread once I cut the inedible crusts off of my chicken salad sandwich.

Eating a chicken salad sandwich in the car with this bread was easier than I expected. The bread felt like it might fall apart, but it didn’t. I tore two sides of the crust off with my fingers, but I left the other two sides and ate around them. That seemed to help the structural integrity of the bread.

Overall, I think that this bread definitely has its uses. I’m glad that a company is genuinely trying to make a more palatable bread for people who have to eat gluten free. I don’t want to discourage people from purchasing it because I want to support Udi’s efforts to make a better bread. So, let me say this: If you’re taking a car trip and you want to take a sandwich with you, or if you use them (as they did at the baby shower) to make finger sandwiches for an afternoon tea, then this is the gluten free bread you want to use. To sum up, I think this is a pretty good special occasions GF bread. I think, though, that for everyday use, at least at my house, I’m going to stick with the much cheaper Aldi brand.