So, I’ve been on a weird kick lately. I’ve suddenly become obsessed with horseradish. My affinity for the stuff actually began a couple of years ago when someone from work introduced me to Wasabi coated dried peas. You can occasionally find these treats made by a company called Fusia at Aldi and I know that Whole Foods also carries Wasabi chickpeas from a company called Saffron Road. I highly recommend both products. Actually, I might recommend eating your own hand if you cover it in Wasabi.

Anyway, Wasabi is a cousin to the European horseradish root that is commonly grown in the US, and my point in that seemingly pointless story above is that I didn’t eat horseradish as a kid. My grandfather did sometimes on roast beef or something like that, but Grandpa also ate squirrel meat and headcheese and he didn’t manage to convince me that any of those things were good either. I think I remember smelling horseradish sauce as a kid and thinking that it smelled like an over-chlorinated pool, so I wouldn’t eat it for a long time. The introduction to Wasabi was the thing that got me thinking that horseradish might not be so bad after all. My first taste of horseradish sauce was last Easter at my in-laws’ house. They don’t eat the stuff themselves, but for some reason they always keep some of the Inglehoffer horseradish sauce in the refrigerator for guests and they just happened to put some on the table to go with the Easter ham. I figured if it was related to Wasabi, it couldn’t be that bad and that was the moment I fell in love with the stuff.

Now, since then I’ve used horseradish sauce sparingly – putting it on the occasional piece of ham or roast beef or even steak as a nice break from the usual A-1. But in the past couple of weeks I’ve started using gobs of it (that is dangerous, by the way, if you’re not used to it) on everything from ham sandwiches to boiled eggs and not just because I enjoy the taste. You see, for some reason my immune system decided to go on strike this cold and flu season and since about September, I’ve had a pretty continuous string of sinus infections and respiratory illnesses. What does horseradish have to do with sinus infections, you may ask? Well, try a half of a teaspoon of horseradish the next time that you have sinus congestion. It’s like an atomic bomb going off in your nose – my face actually turned red when I took a big bite of it – but I promise you that you will be able to breathe easier afterward. 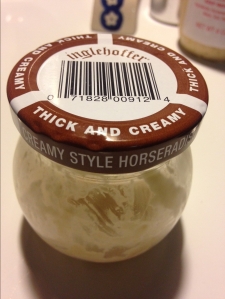 Here’s the German-style horseradish sauce. It’s milder and goes well with pretty much anything 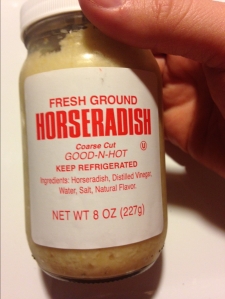 I found this stuff at Publix. It doesn’t even have a brand name, that’s how serious this stuff is. It’s just the grated horseradish root with some vinegar and salt mixed it. 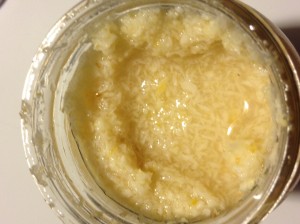 For anyone who’s not familiar with it, this is what the grated root looks like. I’m pretty sure it could peel paint off the walls. Just opening the jar makes our whole apartment smell like it. Tastes pretty good though.

Apparently, the thing that my grandfather didn’t tell me when he was eating horseradish sauce (the stuff he had was always homemade from someone or other’s garden) is that horseradish has been used for years to cure sinus congestion and even sinus infections. I didn’t know that horseradish had such powerful medicinal benefits until I was trying to find an alternative cure for my own never-ending sinus infection this year. In the back of an herbal encyclopedia that my mother gave me, I saw horseradish listed among the curative herbs used for hay fever and sinusitis. According to this herbal encyclopedia, horseradish is high in Vitamin C and contains compounds called glucosinolates that work to thin mucus. A buildup of mucus in the sinus cavity can become a veritable playground for the kind of bacteria that will blossom in to sinusitis. Eating horseradish regularly as a condiment can keep mucus from building up in your nose and causing sickness. Horseradish also has antimicrobial properties that can apparently work like a mild antibiotic once it’s eaten. The glucosinolate compounds in horseradish are also credited with being able to help your body detoxify carcinogens and thereby ward off cancer.

Now, I’m a bit of a skeptic sometimes when it comes to herbal remedies and I never believe anyone who tells me that a particular product or plant or whatever will cure anything that ails me. Once, someone was trying to convince me of the health benefits of essential oils, but they lost me almost immediately when they tried to explain to me that I had to keep the lid tightly screwed on the bottle of the oil because the compounds in the oil are actually alive and that the “living oil” might try to escape – kind of like a genie in a bottle. Yeah. I haven’t purchased any essential oils to date. However, having said that, I do believe that God put natural medicines on earth and that getting as close to what He created to heal us is probably the best thing that we can do for our bodies. I don’t know much about horseradish, but what I do know is this: during my last bout with a sinus infection, I suddenly started craving horseradish like crazy. I was so sick at the time that I really hadn’t eaten anything except tomato soup and I didn’t feel like having ham or roast beef, but I couldn’t shake the craving for the horseradish. Once I started to feel well enough to eat regular foods again, I started putting horseradish on everything and since then I haven’t had any more issues with my sinuses. (I’m knocking on wood right now) So, I thought I’d share what I’ve been learning and maybe help some others through this awful cold and flu season. Also, horseradish and Wasabi just taste good, so why not eat some?

If you want to do some research on your own, there are a lot (I mean a LOT) of natural remedies websites out there that have a deep love for all things horseradish. I mostly got my information from The Reader’s Digest Complete Illustrated Book of Herbs (This book is not as hokey as it sounds. I usually don’t do my research with books by Reader’s Digest but this book seems pretty solid in it’s information) and from a blog post or two that I found on Rodale’s Organic Life’s website.

“Let food be thy medicine and medicine be thy food.” – Until next time, let this quote from Hippocrates to start off all your healthy resolutions. Happy New Year!