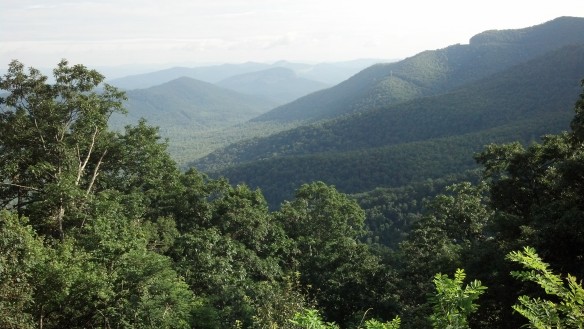 Ever since we got married, my husband and I have shared a dream for our retirement that would combine our love of the North Carolina mountains and the South Carolina lowcountry. We’d have two small homes — one in the Asheville area and one near the coast — and split our time between them. We’d have the best of both worlds.

We searched for months and years and eventually bought lovely lots in beautiful areas: one in Mills River, between Hendersonville and Asheville, and one on Cat Island, minutes from Beaufort. Toward the end of the recession, thinking construction costs were about as low as they were going to get, we started building the first of these homes. If you’ve read any of my earlier posts, you know it’s right on the marsh and immediately became my happy place. We planned to build the mountain home several years later, when we retired and sold our home in the Midlands.

Everything is going according to plan, right? Well … yes and no. We soon found owning and maintaining two homes is a bigger challenge than we expected. And the final price tag of the new home was significantly higher than we originally anticipated. On top of that, the taxes, homeowners’ dues and road assessments on the other lot meant we were writing checks every year for the privilege of owning something we wouldn’t benefit from for many years.

So we made the difficult decision to let the mountain property go, and satisfy our summer cravings for cooler, leafy surroundings by renting from time to time. But during more than a year on the market, we didn’t get even the tiniest nibble of interest. It was so long, the listing agreement lapsed and we didn’t even remember our agent’s name.

That was until a couple of weeks ago, when out of the blue he called to tell us someone wanted to look at our lot. Within days we had a signed contract, with a closing rapidly approaching.

It’s hard to let go of a dream, even when you know it’s the right thing to do. It’s hard when your head and your heart are in different places. Sometimes it’s hard to admit when your dreams themselves have changed — that might mean admitting you yourself have changed, in a way you didn’t plan.

However, I’m making a conscious decision not to second-guess our decision. That means separating sadness from regret, because regret is a waste of time. Learning from past mistakes is one thing, but wallowing in the “what ifs” and “should haves” is unproductive, and constantly looking backward instead of forward can be dangerous (remember what happened to Lot’s wife).

Change may be good for us, but sometimes it’s just hard. And that’s OK.