Well, it is the Lenten season – a time for all Christians to reflect on our own frailty and to understand how much we need the Lord. My church doesn’t follow the liturgical calendar, but I’m starting to reflect on my own frailties this season. Especially because since my last post about sticking to a strict diet and loving plain, toasted walnuts – blah, blah, blah – I’ve fallen off the wagon. It all started with an innocent trip to Aldi. I was picking up some food to take to a party when a box of dark chocolate sea salt caramels caught my eye. I thought that I would just take them to the party – but I didn’t. Once I brought them home, they never made it back out of my front door. And it only got worse from there. I’ve had more bacon, sausage, cheese, chocolate, and cake in the past couple of weeks than I have in the past couple of months. It just proved a point that my pastor often makes – if you preach about something, you should prepare for a test on it the next day. Well, I failed my test, of course. But the wonderful thing is that if at first you don’t succeed, there will always be another test. 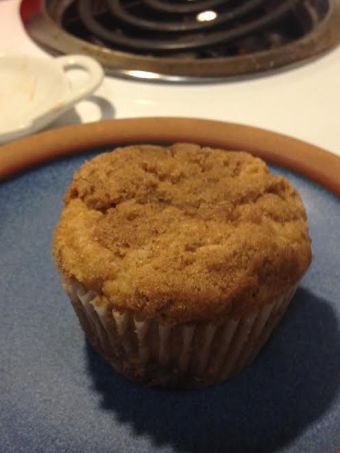 This is a picture of a cinnamon streusel muffin. My mother-in-law made it, and it’s gluten free. AND it’s delicious. I know that she meant well when she dropped these off yesterday, but it’s calling to me. The voice of a cinnamon streusel muffin sounds a lot like those friends you have in college that come to you right before a huge test and ask, Do you have to study? Well, ok then…we’ll think of you while we’re out having fun…

I mean, which would you rather have for breakfast – a delicious, cake-like muffin, or this:

If you said you’d rather have the kale and flax seed, you’re lying. Come on, you know you’re lying. But I didn’t totally fail the test this time. I compromised and had a bit of both.

I think that means that I got a straight C on this test. I’m okay with that for right now. When I first started to go gluten free, I had a whole lot of stops and starts. Once, shortly after I was diagnosed as a celiac, I broke down and ate almost an entire package of Chips Ahoy cookies. The next day the pain in my stomach was so bad that I could barely move off of the couch. It was a lesson learned. I didn’t ever do that again. And so, even though my breakfast wasn’t the healthiest in the world, it was sort of healthy. And that’s a start toward something better.

A NOTE ABOUT GLUTEN FREE STUFF:

Occasionally on here I rant about how the food industry is riding out the wave of enthusiasm over the gluten free diet fad. I don’t mean to try to tell anyone how they should eat or how they should live, it’s just that I think that there is a lot of information out there that is really misleading about this diet. And, as a celiac, I firmly believe that anyone who thinks they may have a gluten allergy/intolerance or celiac disease should seek a medical professional’s opinion. Well, I’m getting preachy again. I don’t mean to, I just hate to see people being purposefully mislead about their health. If you don’t have your health, not much else matters. Your health is important to me, so I’m going to share something that has recently come to my attention.

A few weeks ago, I purchased a container of disinfectant wipes that are supposed to be 99% natural (or something like that). I prefer to use natural cleaners around my house and often times I make my own cleaning solutions. I’ll have to write a post about that sometime. Making your own solutions, though, can be time consuming and a bit of a pain, so I wanted something that would help me when I just needed to do a quick cleanup. About a week after I got the wipes home, I noticed this on the back of the container: 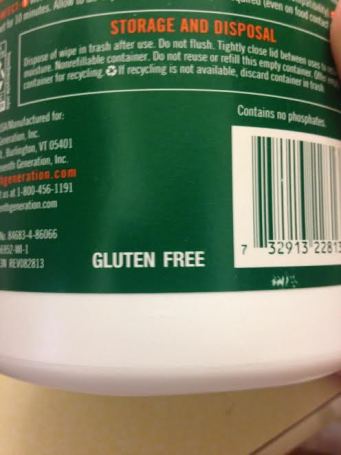 That’s right. Apparently, my disinfectant wipes are gluten free. Do you know what this means? It means that this company is shameless. I guess because most people don’t know much about gluten, manufacturers of all kinds of products are using the gluten free label to sell their stuff. Now, I don’t mind buying a cleaner that happens to not have gluten in it, but I would never purchase a cleaner because it didn’t have gluten in it. The thing is, gluten only affects you if you eat it. No one, not even celiacs, need gluten free cleaners, shampoos or soaps. I mean, if you really think that your disinfectant wipes or your shampoo looks tasty then you have a problem, but that problem isn’t your gluten intolerance. According to Mayo Clinic’s website (the Mayo Clinic is where I get a lot of my information, I trust them as a reliable source), true celiacs only need to make sure that their toothpastes, mouthwashes and lip balms, etc. are gluten free. The reason for that is pretty obvious. You’re probably going to ingest some of your toothpaste and mouthwash and lip balm even though you don’t mean to. According to Dr. Picco of the Mayo Clinic, if you develop a skin rash from touching a product that contains gluten or wheat, you should see your doctor. It could be a wheat allergy (which is not the same as celiac disease) causing an allergic reaction. Also, there is a skin condition that sometimes accompanies celiac disease called dermatitis herpetiformis, but this is not caused by skin contact with gluten, it is only caused by eating something contaminated with gluten.

Well, that was a long rant. I hope it was helpful!!