Growing up it was Thanksgiving, not Christmas, that was my favorite holiday. Thanksgiving was always a big deal in my mother’s family. All of the family gathered at my great-grandmother’s house which stood at the end of a little holler just outside of Portsmouth, Ohio. Her house was tiny and there were nearly always at least 40 people in attendance at this feast of feasts, so to say that it was crowded and chaotic would be an understatement. People ate in the kitchen, the dining room, the living room, one or two would stand up next to the washer and dryer and used them for makeshift tables, and there were always people on the porch and porch steps and scattered around the yard. It was too much for the adults to try to control the kids, so we generally ran around the house like wild hillbillies (which is in truth what we were). The food was always good and plenteous. There was enough for 40 people to eat it for at least two days (because Thanksgiving then was the entire weekend, not just one day). All that running, playing, screaming and eating were so much fun that Christmas day (which was spent at home with just my parents and sisters), even with all its toys, just couldn’t compare.

The first Thanksgiving after I was diagnosed as a celiac, I divided my time between my mother and my grandmother’s houses trying to smile while I choked down a gluten free version of my mother’s homemade chicken noodles. Chicken noodles or beef noodles is the Northern substitute for macaroni and cheese at Thanksgiving. The only version of this dish worth eating is the homemade version where someone has made the egg dough and cut and dried the noodles a day or two ahead of time. When put in with the chicken and the broth, the noodles puff up and are essentially just thinner and longer versions of dumplings. My mother’s noodles were sort of famous in our family, and they were my favorite thing to eat. No one in my family had ever heard of celiac disease or the gluten free diet before my diagnosis and our early efforts to work with gluten free flour often went awry. Case in point: in an effort to not leave me out, my mother made a small batch of gluten free egg noodles and set aside a bowl of chicken noodles just for me. They were horrible. Despite the fact that the noodles were really gritty, they were melting into the chicken broth and becoming one big pile of goo. As a celiac who has loving, helpful family members I have had a lot of practice pretending that food made specially for me – food that’s just oozing with love and is also just oozing – is delicious. You can develop the ability to smile so hard that it stifles your gag reflex. Unfortunately, I wasn’t very good at hiding my disappointment that first Thanksgiving and I think I ended up crying into my sad little bowl of egg noodle ooblec.

Well, now that I’ve gotten that depressing little story off of my chest I’m going to share some helpful hints for gluten free holiday cooking and eating:

Most of all, remember to be grateful. That can sound totally stupid on your first or second Thanksgiving as a celiac, but, in time, when your body has healed itself, the gratitude will come more easily. You will look back on the years of sickness and understand just how blessed you are to have a disease that can be cured simply by eating differently. I always think to myself that I could be lying in a hospital receiving chemotherapy, but I’m not. I am just eating food made from funky ingredients. Those funky ingredients have made me well and whole. Thank God. 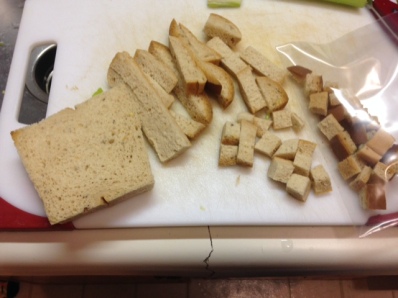 Lately, gluten free ingredients are really holding their own against what we call “regular” or “normal” food. You can purchase gluten free flour that can be substituted cup for cup for wheat flour in any recipe. Only people who have been gluten free long enough to remember the umpteen-gazillion little bags of Bob’s Redmill flours (almond, rice, amaranth, soy, etc) and the 8oz bags of Xanthan gum that sold for 12 bucks can really appreciate how amazing that is. So, if you like to make your own pie crusts (I never did), it’s now easier than ever to do it gluten free. You can also buy pre-made pie crusts from Whole Foods that are pretty decent. (I recommend the Whole Foods brand.)

For dressing or stuffing (whatever you want to call it), gluten free bread works pretty well. I think that you could use pretty much any family recipe that you have for dressing. The only thing I would suggest is if you don’t toast the GF bread before using it, watch the liquid to bread ratio. While GF bread is so dry that it’s impossible to eat right out of the bag, it also has a tendency to fall apart and melt in too much liquid. I don’t mean get soggy, I mean it can melt in too much liquid. So, if you want to make a really moist stuffing, you might want to lightly toast the bread first, just so it holds up to the liquid a little better.

Also, I know that the holidays can be expensive no matter how you cook, but gluten free cooking is really expensive. I used to pay about $6 for a loaf of gluten free bread because I thought that the cheap stuff just wouldn’t taste as good. Cheap gf bread is about $3.50 a loaf, and keep in mind that the bread slices are about 2/3 the size of a regular slice of bread and the loaf is maybe half as many slices as a regular loaf. I was buying two loaves per week at $6 each for myself at one point – that’s a staggering $12 per week on bread for just myself. At the time I didn’t make $12 an hour at work. For those of you trying to do a gluten free diet on a shoe string budget, I feel you.

Good news, though. Aldi actually makes gluten free bread now. Their slices of gluten free bread are actually bigger than most other brands, though the loaves are still kind of small. BUT, the best part about this news is that Aldi’s gf bread is actually the best gf bread I have ever tasted. It still has to be toasted before being eaten, but after it’s toasted it’s softer than any other gf bread I’ve tried. That six-dollar-a-loaf bread was so thick and cardboard-like that after I toasted it, it would dry my mouth out and sometimes cut my gums in a way that looked like I had somehow scraped the inside of my mouth on the sidewalk. I have also made some of the best dressing with Aldi’s bread. The stuffing for the chicken pot pie casserole that I made a while back was with the Aldi’s bread and it was by far the best part of that dish. 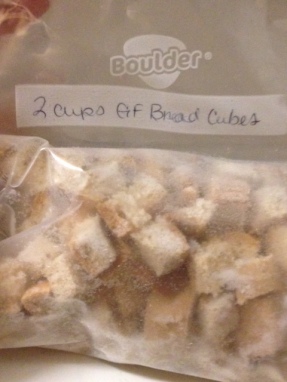 Another cost saving measure that I started a while ago was saving the heels and crusts of my bread. I have never eaten heels of bread and gf bread crusts (even Aldi’s) can be seriously dry and unpleasant. So, after a while of getting physically ill over the money I was wasting throwing those heels and crusts away, I decided to start grinding them down to make breadcrumbs and cubes that I have used in other dishes. No more waste and no more buying packaged breadcrumbs and whole loaves of bread just to make dressing. I stock quart freezer bags in my pantry and whenever I cut crusts or grind up heels, I just toss them into one of the bags (I often measure them as I put them in the bags to make recipes more precise) and put them in the freezer. They keep really well and are such a handy cost saver!

Well, those are all my holiday food tips for this post. If you have any questions, please leave them in the comments section and I will be more than happy to answer them or find an answer for you!

Suggested Reading: “Simply…Gluten Free Quick Meals” by Carol Kicinski. It’s not literature, but it’s so amazing for any gf cook. She does a whole Thanksgiving meal in this book with really simple recipes and ingredients, plus she has a section about basic flour mixtures and how to stock a gf pantry. This is my go to recipe book.

1 thought on “Getting Through the Holidays Gluten Free”