I went to the grocery yesterday to grab a few to get us through the week. I had both kids in tow, so I knew I had to be quick. A meltdown was inevitable; we were in the grocery, after all. I scooted through the produce section and then made my way down to the meat department. I skimmed the prices, hmm’d and haa’d and bocked at the prices, and  then finally made a small selection. Whoohoo! We made it out with no major issues.

Later in the evening I mentioned the prices to my hubs in disbelief. I complained about the value – or lack of – compared to few years ago and simply just grumbled at the wgeneralcost of food. Shortly after that conversation I got the most paralyzing headache and had to go lay down. And that is where I stayed until early this morning.

I was recapping my evening, thinking about those prices, when I suddenly remembered my walk one morning. It was the first walk I’d taken around the neighborhood. Pushing the double jogging stroller, I had entered a street just two down from my own. What I saw made me feel a bit uncomfortable. Not because of ethnicity, age or even gender, but because it was all too familiar; it was poor. Real poor. Not the “I don’t want to pay $200 for an electric bill,” but the “I have to make this one meal become two” kind of poor. Now let me just say that I don’t know this family I’m writing about. I don’t know if they are having trouble putting food on the table or paying their electric bill. I am simply saying that seeing them made me recall situations from my own childhood and some of the struggles my mom had. 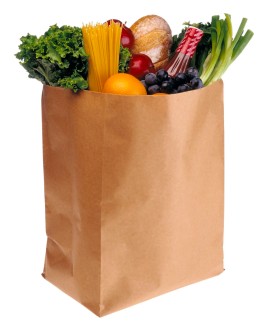 I stood there washing dishes thinking about this family and my grumbles about the cost of food. I was humbled and then grateful. I have said too many times lately “There’s just not enough,” “How are people making it?” and “What are we doing wrong?”  You see, there is enough. It’s all in the way I was looking at it. I was replacing needs for wants. What I “need” is to shut my trap and be very, very grateful for the blessings I’ve been given. So what that I can’t go buy or spend whatever I want? Neither can most of the world.

So I present this challenge: Buy an extra bag of groceries, drive down a road you wouldn’t normally and drop it at a house you think might need it. Being grateful for what you do have isn’t always easy in a world that is reminding you of what you don’t have.