A year after adopting our first two cats (a story for another day), we decided it was time for my son to care for a fuzzy of his own. I was kind of hoping we might find two kitties, and that one of them would like me. I was feeling kind of left out of the fuzzy cuddle world by this point, since my husband and daughter both had kitties who loved them. We found a couple of gorgeous blue-eyed babies that a family was trying to re-home after her female cat reproduced unexpectedly. I’m pretty sure mama was a seal point Tonkinese mix, or something close to that. We saw dad, too. He was a HUGE gray tabby. I immediately went to the biggest, plushest, calmest, mitted blue lynx point kitty and started snuggling up to him. He was so calm and laid back. “Floppy,” is a good word to describe this kitten. He was just what I was hoping for! A relaxed, huge, lap kitty.

Is That a Squirrel? 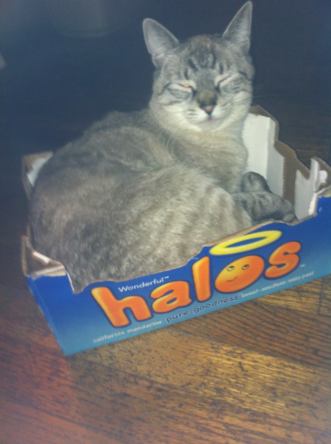 While we were looking at all the other cats the family had milling around, there was another kitten climbing pretty much everything she could touch, scrambling around the house madly. She was really small, with charcoal gray paws that remind you of a koala, and lynx point coloring, and was INSANE. My husband, of course, thought she was the best thing since peanut butter and after chasing her down, he picked her up and tried cuddling her. The family she lived with had named her Squirrel and said she was the runt of the litter. And like a squirrel, she basically climbed up and down my husband. My husband loved her wild, spunky attitude and fell in love with her. Little did I know, he had decided that this crazy kitty was perfect for…ME. Yep, she was going home with us, too, he announced as I eyed him incredulously. Ummmmm…okayyyy. Fine. This “Squirrel” and my big, floppy, kitten. Hopefully my son would like Squirrel, hahaha! We carried them out to the car and put them in the kitty carrier in the back seat. I sat in the back with them to try to help them feel less lost and alone. 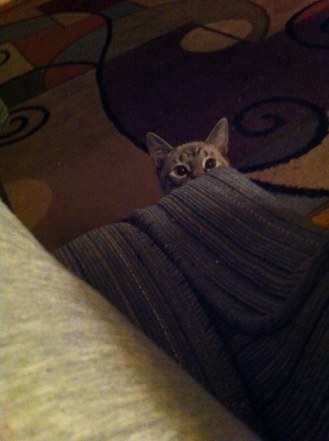 Tonka trying to pounce without being noticed

I shouldn’t have worried. Enormo-kitty cried, but wasn’t horribly upset. Crazy Squirrel on the other hand, fiercely battled every inch of that carrier. Did you know cats can bark? Loudly? Yeah…she was barking her head off and at one point, I’m pretty sure I saw a scene from the Exorcist replay in that carrier. Our little squirrel kitten was TICKED OFF. There was nothing I could do to console her or calm her. By the time our 45 minute ride was over, both kittens were exhausted. We took the carrier out of the car and snuck in the house to surprise my son. He was so excited! Of course, the idea was to hope that one of the kittens would take to him, and become his buddy. I was hoping it would be squirrel kitten. She was just way too crazy for me, I thought. But, as it turns out, enormo-kitty and my son became buds. Enormo was officially named Frankie and is now about 20 lbs of floppy handsomeness. And Squirrel… 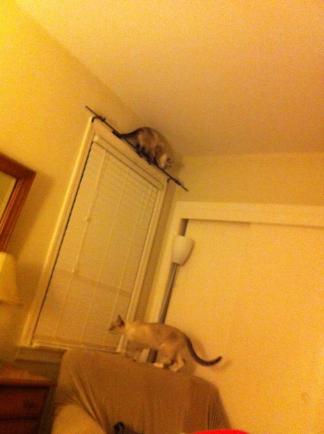 Tonka the squirrel perched atop a curtain rod. Brother Frankie staying close to the ground.

Squirrel was dubbed Tonka, like the truck that runs over things. And like the Tonkinese breed she seemed to take after so much. Tonka was an “I love everybody!” kitten. She also loved everything, and therefore spent as much time as possible pushing, pulling, chewing, climbing, and destroying all the things she loved. Like lamps. And curtains. And boxes. And dishes. And fridge magnets. And spots on the wall. And earrings…while you’re wearing them. She also knows what coffee tastes like, because she stuck her paw all the way in my cup one morning. She knows what the inside of the fridge feels like, because as I went to close it one day, she darted in and I shut the door on her. She screamed the Tonka-Banshee scream and I thought I’d killed her, but she was fine. I sobbed and shook and held her, apologizing profusely. Not long after, I went to carry her out of our bedroom, and started to shut the door behind me and yep…Tonka-Banshee scream. I had not seen her tail near the crack of the door and it started to close on it. Again, me sobbing and shaking, terrified I’d broken her sweet little kitten tail. I had not broken my kitty, thank goodness. She forgave me immediately, both times. And thus…I was hers. Before I even realized it. 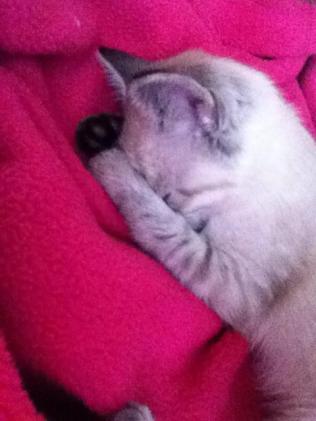 Tonka is very easily startled and extremely vocal about it. She sleeps hard, although a good bit less than the average cat, and when you nudge her to wake her, she will “cuss” you out for it, while petting you lovingly. We believe she is hard of hearing, but not totally deaf. She is the first to greet me when I come home and will yell at me if I don’t head to the bedroom fast enough for her. She loves nothing more than to curl up in my lap for her naps, except maybe batting at the dripping faucet in the bathroom, after she’s looked for the tweezers to drop down the sink so she can see where they go (wonder why the sink gets clogged?). 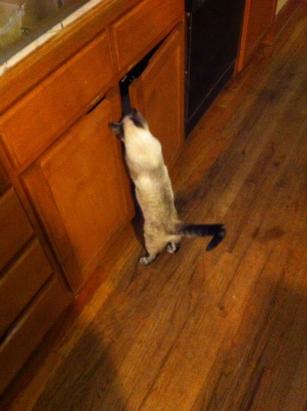 Tonka thinks there’s a magical world behind that cabinet

Tonka is the reason we have no decorative knick knacks or breakables. She is the reason we have nothing pretty perched atop the cabinetry in our kitchen. She is the reason you hear us say “you better put that away,” at least 50 times a day. And no, a drawer is not good enough. Despite knowing she’s not allowed on counters, when we aren’t looking, she will hop up there and use her paw to slide a drawer open. Usually it’s the utensil drawer, so she can get a spoon out to throw on the floor next to her “kitty toys” she has to play with. If you only knew how many times we’d been awakened during the witching hours by a crash. Always a result of my Tonka, misbehaving while the other cats eye her sleepily. You can practically hear them saying “dude, she’s crazy…isn’t there a little white coat you can put on her so we can sleep?” But she’s SO cute. And she’s SO loving. And she’s SO social, and engaging, and smart. How can you not love Tonka? Even when she shoves your coffee to the floor, and then walks over it to come cuddle you?

Indeed. How can you not love these fuzzy wonderments of ours? Thank goodness for them all!

1 thought on “For the Love of Fuzzies”