There is a debate going on at my house, a quandary of sorts if you will.  While the world is focused on a Presidential campaign, Occupy Wall Street and March Madness, my husband and I are debating who makes the better peanut butter and jelly sandwiches.  Before I begin, let me state this disclaimer:  In no way am I making fun of rather serious topics happening in the world right now, however, this is my attempt at some humor.

For some time we have gone back and forth about how you should make a peanut butter and jelly sandwich.  Our girls love PB&J for breakfast, lunch and dinner.  They are PB&J groupies!  However, here is where the debate comes in:  When I make peanut butter and jelly, I am more of an equal opportunity gal. You know, spreading peanut butter on both sides of the bread liberally and adding grape jelly evenly on both sides of the bread.  Now that is a sandwich, the jelly seeping out the side with each bite, Yum! 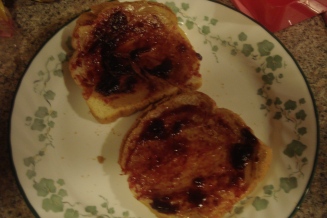 Now, my husband is not so liberal with the condiments.  He makes his sandwiches by spreading peanut butter on one slice of bread and jelly on the other slice.  Really?  When I saw this I joked with him that there is no love in his sandwich making.  And the children like mine much better.   My husband’s argument; spreading peanut butter and jelly on both sides of the bread are a waste.  I was appalled he would state how I make a sandwich is a waste!

In order to back my claims I did some research on “Google” of course.  According to Smuckers, no one really knows when or where the salty meets sweet sandwich was first created.   Bread and jelly have been around for millennia, but as for peanut butter, that wasn’t invented until 1890.  This spreadable creation took off at the 1904 World’s Fair in St. Louis, and during the 1920’s and 1930’s, commercial brands of peanut butter such as Peter Pan and Skippy were introduced.  Food historians discovered both peanut butter and jelly were part of the U.S. military’s rations during World War II.  This lead to the speculation that American GIs may have added jelly to the peanut butter to make it easier to eat.  Way to go guys! The National Peanut Board reports the average child will eat 1,500 peanut butter and jelly sandwiches before he or she graduates from high school.  Wow, that’s a lot of PB&J!

To also further my support that I am the best peanut butter sandwich maker, I took to YouTube.  Seriously, there are videos about everything else, right?  Now ,I will have a video of a “professional” proving I was right.  Well, I was completely wrong.  Most of the videos claiming to show how to make the “best” peanut butter and jelly sandwiches showed his method. (GASP!)  How could this be?  Peanut butter on one side and jelly on the other! This is a conspiracy!

Oh well, I will continue laying it on thick with the hopes that the rest of the world will get with the program (insert laugh here).  Meanwhile, I think I will go and make my husband a sandwich as a way to say he was right and I may be wrong (wink wink).

Now it is your turn how do you make your PB&J?

9 thoughts on “A Rather “Sticky” Situation”